Article on Transition Consciousness: A New Purpose for Communication in Advertising 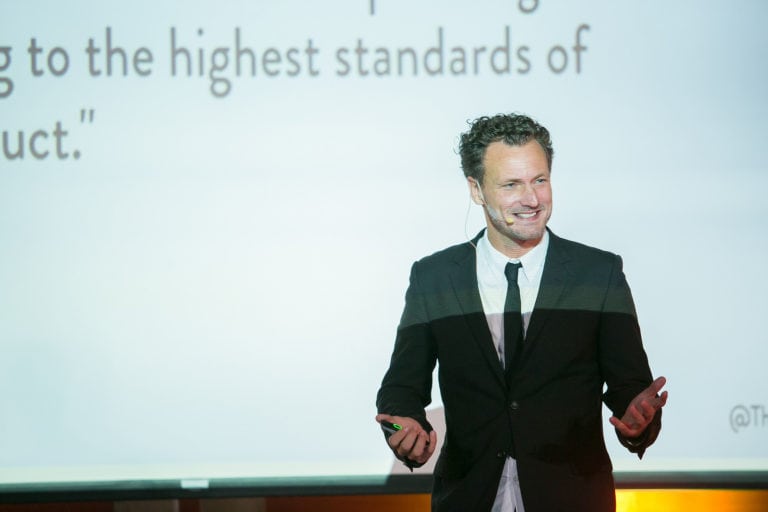 By Simon Robinson for Transition Consciousness, March 4, 2017
Thomas Kolster describes himself as an “ex-advertising guy and a man on a mission” and that mission has been to turn advertising into a force for good. Describing this mission as Goodvertising, Thomas hopes to see brands develop a much bigger vision where they start to solve some of society’s biggest problems as opposed to creating false desires.

Maria and I first met Thomas at Sustainable Brands London in 2014, and it has been a pleasure to watch Thomas relentlessly taking his message around the world. It was therefore great to be able to catch up with Thomas again at Sustainable Brands Bangkok where he spoke about purpose in communication and advertising.

Thomas began his pivot in advertising in 2009 when he began to interview many of the leading names in advertising and marketing. This led to him publishing his book Goodvertising: Creative Advertising that Cares in 2012, receiving much critical acclaim.

Thomas has a singular purpose which is to turn advertising into a force for good. Making the observation that “purpose is very difficult to get right” his presentation focused on how to get purpose right in business. You can watch his presentation below:

In this talk I really like the way he opens with an explanation of “the two headed purpose monster”, a metaphor to describe the seemingly contradictory tensions between profit and purpose. This is a theme which Maria and I have been having a lot of conversations about recently, and as Thomas notes, we have to talk about these two different dimensions honestly “otherwise we won’t get it right”.

Maria and I were able to spend some time with Thomas in Bangkok and were able to record an extremely interesting conversation with him which we will be including in our book Customer Experiences with Soul.

Source: Customer Experiences with Soul: A New Era in Design

In our tool The Holonomic Circle we locate “the good” as a transcendental, an element which forms one aspect of ‘being’. From a Platonic perspective we can never arrive at a fully objective definition of good, but we can come close to it through ‘beauty’ which shines a light on that which is good.

However, you will see that the circles in The Holonomic Circle are all open, and this signals that we find the essence of each element in all the rest. And so we find goodness through living the five universal human values of peace, truth, love, righteousness and non-violence. And we can find goodness in our purpose only when we first have full coherence in what we say, what we do and how we act.

In our own presentation at Sustainable Brands Bangkok Maria and I mention the idea that nowadays internal equals external. This is the philosophy articulated by James Watt, the co-founder of BrewDog who fully understands that given the unprecedented levels of transparency and connectivity, there has to be full coherence between what happens inside a company and what happens outside.

These last two weeks have seen a dramatic change of perception of Uber, a situation which demonstrates completely the idea of internal = external. In an extremely short space of time Susan Fowler, an ex-engineer revealed their sexist culture where extremely offensive behaviour went unpunished, an Uber driver released a video of himself arguing with CEO Travis Kalanick about the perceived unfairness of the ever-changing business models, and Uber’s extremely questionable tactics to allow it to evade law authorities in areas where it is banned.

Thomas ends his talk by saying extremely bluntly that “to recognise bullshit nose is better than ear” and I really like this. I do agree that we have to call bs on those campaigns, organisations and people who are not coherent in what they say, what they mean and how they act. The good news is that with the developing groundswell in the conscious consumption movement, people are not accepting the fake or counterfeit any more and this is the force for good.

To join in please visit Goodvertising.site

You can watch our own talk here: Customer Experiences with Soul