Congratulations to all the winners at Epica Awards 2016 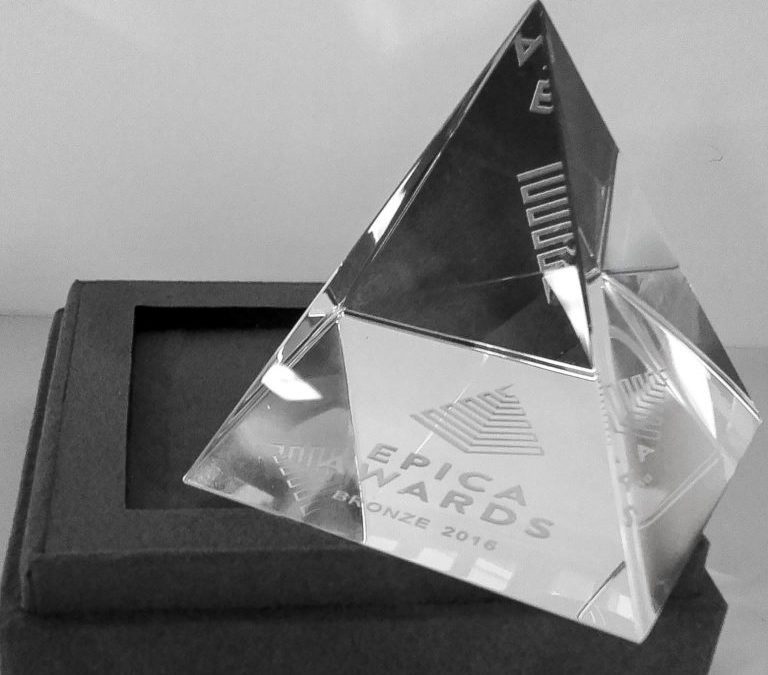 I was invited to do a keynote at the 30th annual Golden Globe of advertising, Epica Awards, which was held last week in Amsterdam. It was clear that goodvertising is now truly on its way forward. I was truly very excited to see lots of creative goodvertising campaigns being celebrated, a great tendency I have noticed across award shows all year. Advertising is now finally changing for the better and brands are starting to realize, they have power to make this world a better place.

Trends are not only reserved for the fashion industry, and this year two causes were clearly trending in the do-good field. A strong focus on female empowerment campaigns were seen with great campaigns from brands like Åhlens with their “No Limits” campaign by Forsman & Bodenfors, showing that clothes shouldn’t be age restricted. Also H&M had a message about strong women and female empowerment with the campaign for their Fall 2016 collection “She’s A Lady” also made by Forsman & Bodenfors.

But empowering women in all ages wasn’t the only trending do-good cause at Epica 2016. Two great campaigns for the visually impaired also stood out from the masses. Especially “DOT. The First Braille Smartwatch” by Dot Incorporation and Serviceplan Munich + Seoul made an impression , but also Samsung’s “Touchable Ink” by JWT Bangkok is an amazing innovation that really makes a difference for visually impaired people.

Epica for the environment

With a separate category for environmental campaigns, Epica stands out from all the others award shows – something we would encourage more to do. This focus on the environment is much needed, especially these days where climate change steals even more headlines every day and the visual proof of it isn’t possible to ignore. However, still this year way too many polar bears stole the picture, even though the majestic white bears are not the real face of climate change. But as we know, they do make much cuter posters than water scarcity, wars and pollution.

The Scandinavians really rocked the environment category, and two great campaigns from Sweden and Norway caught our attention: H&M’s “World Recycling Week” succeeded in making recycling cooler than ever with their amazing music video featuring artist and singer M.I.A. and some of the best dancers in the world. The Olso-based agency Kikkut succeeded in personifying why you shouldn’t throw garbage in the streets in the campaign called: “Together we can make Oslo a cleaner city!” for Rusken (Oslo’s cleaner city initiative). Using King Karl Johan of Norway and Sweden (1818-1844) as main character, they kindly asked people not to throw trash on the King.

Winning campaigns worth a closer look

But the Scandinavian and Asian agencies weren’t the only great winners at Epica 2016. Take a closer look at more campaigns that really deserved their gold and silver:

“Simplified Stories” by DDB Brussels for Alzheimerliga. A book for Alzheimer patients, much easier to read and understand than normal books.

“WWF Iceberg” by Leo Burnett Group Manila for WWF Philippines. The usual melting ice caps from WWF with animals take home the Gold. But WWF Philippines are excused – this is probably exotic for them…

“momondo / The DNA Journey” by NoA / &Co. Copenhagen for Momondo. An open world begins with an open mind – We have more in common with the world than we know, including our DNA.

“25m2 of SYRIA” by POL, Oslo for Ikea, NRK TV Aksjonen and Norwegian Red Cross. A replicate model of a Syrian home in an Ikea store in Norway showing shoppers what life inside a war zone is like.

“Disappearing Animals – Destroying Nature is Destroying Life” by Grabarz & Partner (Hamburg) for Robin Wood e.V. The polar bear once again runs off with the gold as the face of climate change on print.

“The BMW Animal Detecting Billboards” by Demner, Merlicek & Bergmann for BMW Group Austria. BMW night vision system built into the digital billboards in Austria to prevents road kills – Taking a responsibility for those inside and outside the car.

“Flash of Light” by DDB Copenhagen for McDonald’s Denmark. Ronald McDonald House – a temporary home for families of seriously ill children who have a special need to be close.

“SAVE THE FOOD: The Extraordinary Life and Times of Strawberry” by SapientNitro for Natural Resources Defense Council. Campaign against food waste.

“Brewtroleum” by Colenso BBDO Auckland for DB Breweries. How you can save the entire world by drinking DB Export.

“For Every Victory” by H&M. Sportswear ad. Nothing truly important ever comes easy. Victory is to keep going.

“Afterlife” by TBWA\Sri Lanka for Ceylon Newspapers (Pvt) Ltd. Even a tiny paper has an afterlife. Recycling campaign.

“The Cutest Cause” by McCann New York for Tommee Tippee. Ultra Bottle – The only baby bottle you’ll ever need.

“Be The One” by Leo Burnett Istanbul for Greenpeace Mediterranean. How we together can stand against fossil fuels and deforestation and make a difference.

This Epic’Award show certainly lived up to its name and with so much interesting goodvertising work out there, it suddenly seems like the world isn’t so bad after all.