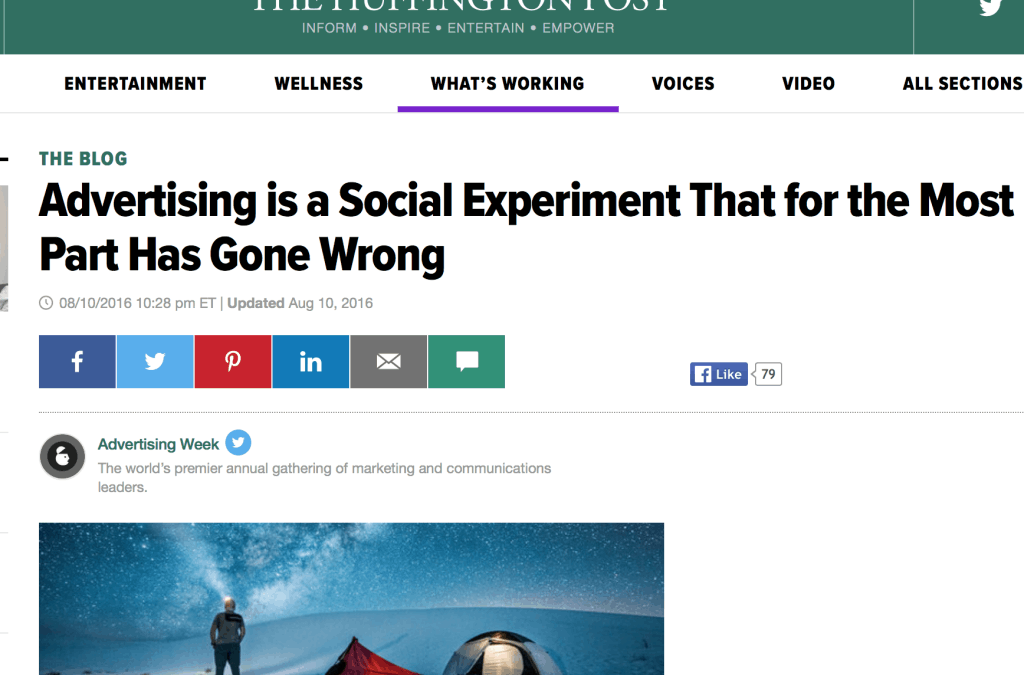 As an industry we’re ignorant at best or utterly demagogic, one-sided and irresponsible at worst. The majority of do-good efforts from brands are ridiculous and nothing but a cheeky pick-up line to charm consumers into buying more. How can we continuously ignore the societal or environmental consequences of our craft? I often hear marketing execs talk about advertising as a mirror of society despite its omnipresent impact. Advertising unquestionably promotes screwed-up beauty ideals, preys on people’s insecurities and egoism and pushes a material arms race where people are considered backward if they don’t have the newest gadget. One of the prevailing arguments comes from our industry itself. In research paid for by the UK Advertising Association, Deloitte found that when a pound is spent on advertising, it adds six to the United Kingdom’s GDP. This calculation is only based on a few positive metrics and discounts negative effects like health, societal and environmental damages. Doesn’t that sound just like advertising?

There’s nothing more disarming than honesty

But there are brands out there that dare to take a holistic approach to their roles in society. In 2011 when Puma’s CEO at the time, Jochen Seitz, delivered the yearly financial results, and boldly disclosed that Puma did more than €145 million euros worth of environmental damage (water use, land use, air pollution, waste and more), it was a confident, but calculated approach. As he said, “What you cannot measure, you cannot change.” Today Puma has launched an environmentally friendly collection, “Puma’s InCycle collection” and is showing the environmental costs in euros on the price tags. They have already succeeded cutting down those damages by up to 30%. It pays to think in terms of impact.

One would think we would have learned from the era of Big Tobacco decades prior, but history tends to repeat itself. What’s the societal cost of peddling products like Kellogg’s Coco Pops to children and branding it as breakfast when it essentially has the same amount of calories as a Snickers chocolate bar? The founders, Keith & John Harvey Kellogg, wouldn’t be proud. It’s a smoking gun – and we pulled the trigger. I am embarrassed by our industry when I see the ignorance in our work. Consider Coca-Cola’s “Happiness Arcade” where some of the world’s poorest people in Pakistan were rewarded for recycling PET-bottles with a fun, arcade game. The campaign is a brilliant thought, but only ran for two weeks… What impact did it really have or is it yet another flirtation with real change from addend? And what happened with Samsung’s “Safety Truck” initiative that harvested lots of awards last year? Stuck in a never-ending beta-test phase or just another marketing gimmick? Let’s not fool around anymore, but be serious about our problem-solving ability. Ideas can happen in the shower, real solutions demand time & hard work.

We need to ask different questions, if we want different answers

I applaud an award like D&AD Impact (Although, I must admit I’m not entirely impartial, as a judge). It’s a great way to charter a different course forward for advertising, create new aspirations and kick-start a serious discussion about impact. But the big question is, how can we pass the baton when the projectors on the award stage go dark? Let’s not rest on our laurels with an award. Let’s aim higher than inspiration and aspiration. I have a challenge for you. We need to ask different questions if we want different answers. And I believe we can create much of the change needed by changing one essential piece of the puzzle: the brief. Rather than just elaborating on sales goals and brand awareness force yourself to ask a different question: What’s the true impact of this brief? Is it measurable? Is it more bad than good? Let’s get together as an industry and develop a briefing template that can act as a foundation for a new type of craft that weighs and measures the societal and environmental impact. Ready to pick up the baton?

Value for us – or value for those with power and influence?

In a transparent world, there’s nowhere to hide. And the questions are only getting tougher. Is the oh-so-celebrated purposeful company Starbucks really that much of a do-gooder compared to newcomers like Wheels? Say hi to Wheels, a chain of organic bicycle cafés, enabling people (ALL people) to start their own businesses and pursue their love for coffee. Since launching in 2014, Wheels has exploded all over the world and currently operates cafés in more than 45 countries. Wheels supports a decentralized model that empowers people and makes a difference in the local communities whereas Starbucks is a centralized model that generates value for shareholders (doubling its share value over 5 years), but at the same time struggles with labour issues & paying for our common good (Read: Taxes). According to research by the New Economics Foundation, money spent in local outlets stays in the community and benefits it up to 3 times more than money e.g. spent in a supermarket. Companies like Wheels, B-Corps, cooperatives and similar initiatives offer a strong and convincing brand story because they’re based on democratic principles where everybody can gain and take part instead of being limited to those with wealth and power. In the pursuit of impact, one can’t help but ask: What’s the true societal and environmental value of a given brand?

Your creativity is the only limit

Advertising is a social experiment that for the most part has gone wrong. An old model that seems unfit to serve a changing world that’s more about solving needs rather than pushing wants. Like digital pioneers such as Mark Zuckerberg & Bill Gates, who have revolutionized our society as we know it there’s a new type of nerd you should want to befriend: The sustainable crusader. These green nerds are transforming everything from how we eat, to how we dress and even how we live. Clothing grown out of mushrooms, lab-grown meat, self-sufficient villages or solar planes are not pie-in-the-sky projects anymore, but soon making their way to a supermarket shelf or a 3D-printer near you, leaving disrupted industries in their wake. There’s simply no room for self-serving brands that don’t want to be a part of the solution. For you as a marketer there’s never been a more exciting & interesting time to apply creativity. You have every possibility to come up with real solutions rather than blowing more hot air into an already deflating advertising bubble. This change begins with us as an industry understanding and measuring the damage and it begins with you striving to make a real difference. Your creativity is the only limit.