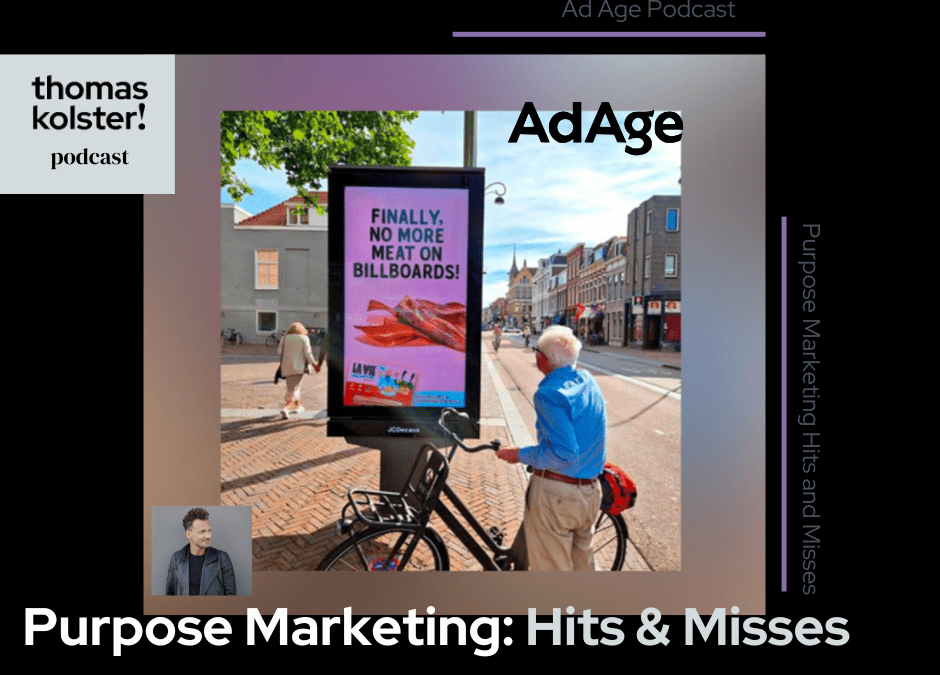 As part of Ad Age’s weekly Marketer’s Brief podcast, on a monthly basis, Ad Age and I explore the best and worst purpose marketing ads.

Here is the most recent podcast from the 2nd of October – article taken directly from the Ad Age website.

Paris-based La Vie Foods found an ingenious way to plug its veggie bacon by seizing on a move by the city of Haarlem, Netherlands to ban meat ads from public spaces. The law, which takes effect next year, is designed to combat climate change; the city considers meat production among the activities that contribute to the climate crisis, according to this report in The Guardian.

But La Vie’s bacon, being meatless, does not fall under the ban, which prompted the brand to run billboards declaring, “Sorry Haarlem, you can’t ban this bacon ad,” and “Finally, no more meat on billboards.”

“It’s smart in that sort of Oatly kind of way where it’s an ad that talks about an ad,” said Kolster, referring to the self-referential approach of the plant-based brand Oatly. “It just provokes a response,” he added. He also said the approach fuels the larger global discussion about banning certain ads. “For them to actually go in there, tongue in cheek, take that conversation, I think it’s a lot of fun.”

Speaking of climate change, grocer Lidl in Sweden has a fun print ad out that plugs its decision to stop flying fruits, vegetables and other food items to its stores. The ad shows various birds that don’t fly, ending with a Kiwi fruit with the description “stopped flying three months ago”—a play on the fact that Kiwi birds are flightless. 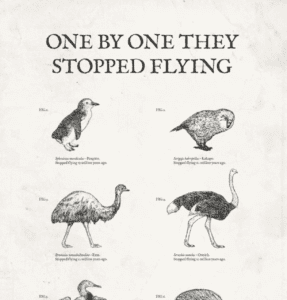 “In a world that is full of gimmicks, I just sometimes miss that really good print ad,” said Kolster. The Lidl ad “is a good way of making the viewer smarter,” he added. And the ad is backed with a significant commitment, he noted.

Kolster is also a fan of a Heineken ad that highlighted its commitment to renewable energy by installing a solar-powered billboard at Brazil’s “Rock in Rio” festival that cools beer at a local bar.  It was installed at Brewteco, a famous bar in Rio’s Gávea district, during the festival. The text on the billboard informs viewers: “This billboard is cooling your Heineken. Cheers.” It comes from the agency Le Pub Brasil.

The ad is “super relatable and personal,” Kolster said. “If you live in Brazil, it’s damn hot. You like a cold beer. And you certainly see a link between renewable energy and a cold beer.”

Apple has made plenty of iconic ads over the years, but a recent effort, called “Dear Apple,” misses the mark, according to Kolster. The spot features people reading letters addressed to Apple CEO Tim Cook, praising Apple Watch for saving their lives, as a way to plug its features such as those that read vital signs.

“It’s just too much over-the-top,” Kolster said. “They’ve gone down this ’80s, testimonial-style advertising [road] that Procter & Gamble was so well known for. And in some ways Procter & Gamble has moved on, but for some reason Apple went back [to] that avenue. It just doesn’t come off as authentic.”

Kolster is also not a fan of an ongoing campaign by the nonprofit Project Everyone called “The World’s To Do List.” It seeks to inspire action to meet the United Nations’ 17 Global Goals for Sustainable Development by showing large sticky notes on various locations across the globe. For instance, a note reading “achieve gender equity” is shown on the Great Pyramid.

“I think the idea is banal, it almost seems like student-type work,” Kolster said. He suggested the goals be a little more actionable, like suggesting ways to end poverty by encouraging people to buy from companies that pay people fairly—“If they just had at least written that on a Post-it note, I would have at latest loved it a little bit.”

Kolster’s final miss comes from clothing brand The Woolmark Company, whose global brand campaign “Wear Wool, Not Fossil Fuel” aims to educate consumers about the dangers of synthetic textiles. It does so with a video showing people emerging from an Olympic-sized swimming pool filled with oil. They slowly peel off the oil and are shown walking through the sunny woods wearing Woolmark’s Merino wool clothes, which are plugged as “100% natural.” The ad comes from 20something, Park Village and Studio Birthplace, according to theindustry.fashion.

“It was almost too literal and talking down to me,” Kolster said. “If you are going to pick up that lovely Merino wool sweater, I don’t want to feel talked down to with all these scenes of oil. There probably should be a better story you could tell. Maybe it’s about making the product more high-status, that you are the smarter one that you chose this.”

To listen to the full podcast, click here: https://bit.ly/3e7akX3
Shares