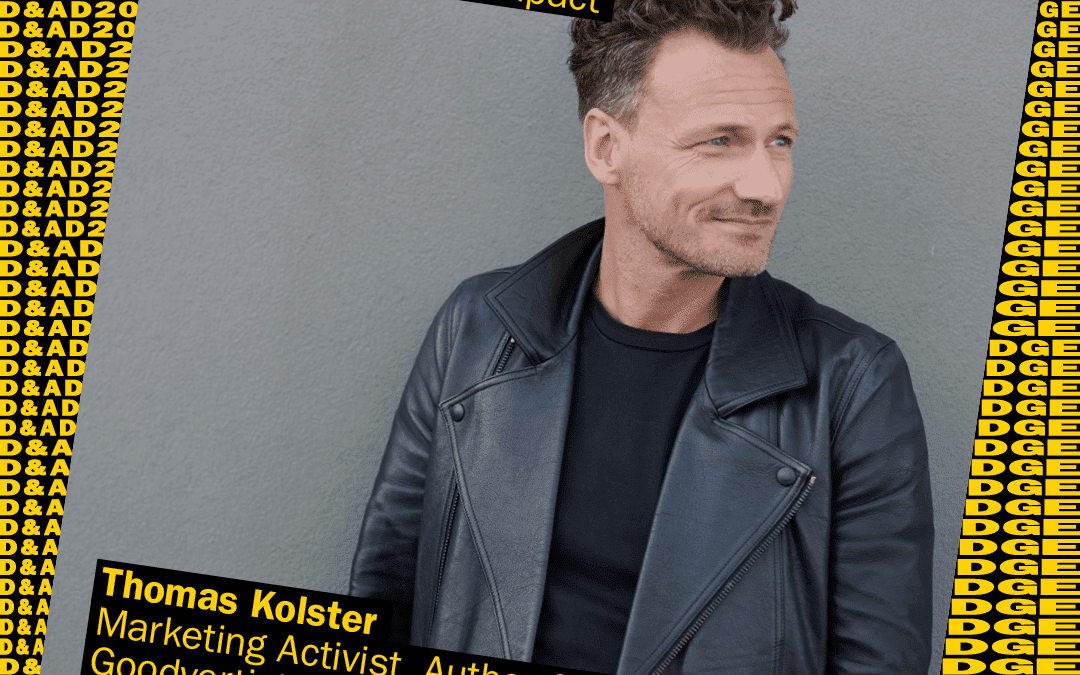 As I prepare to head up the Impact and Future Impact juries at the 2022 D&AD awards, I talk about why creatives should stop focussing on small interventions and move on to bigger, systemic challenges.

For the most part our industry is no better than a sausage factory. A client gives us a brief and after we rack our brains; out comes the sausage. If we’re really creative, and impact focused, the sausage might be rainbow coloured or vegan. Groundbreaking. Briefs don’t ask big enough questions and the result is incremental change. Yet with only eight years to live up to the Sustainable Development Goals set by the UN, it’s time we step up to the challenge wholeheartedly as an industry.

We are the problem. For decades, we’ve been telling generations that success means money and materialism. Our craft has shaped cities into places of consumption rather than healthy communities for citizens. The negative impact of advertising and consumerism is visible everywhere – from our collective mind to the deepest bottom of the ocean, the Mariana Trench, where researchers have found a plastic bag. This is not a problem that can be solved by getting people to use less plastic bags, we need to look at ideas for systemic change, where we truly put a plug in the waste stream. We need to think about the bigger picture: the system accountable for those plastic bags.

“This is not a problem that can be solved by getting people to use less plastic bags, we need to look at ideas for systemic change”

The first step to solving a systemic challenge is understanding what the challenge is. If you are ever going to be a good impact creative, you truly need to think like an anthropologist and go and immerse yourself in the issue – and the whole issue. You’re not going to understand the challenge of preserving The Congo Basin (the world’s second-largest tropical forest) from the comfort of your office chair. If you’re not able to go there, talk to people who have been there. Reach out to non-profits working in the area. Are there companies or foundations working in the region to preserve forests? Talk to lawyers and economists and politicians. Watch documentary films about the issue. What’s the systemic challenge? Is it the short-term win of cutting down the forest versus the long-term gain of living off the forest?

Understanding the point of view of everyone involved is a crucial second step. Turn the creative process into a town hall, because that’s where you might find the solution. The surge in piracy we have witnessed at the Horn of Africa is partly due to fishermen not being able to live off fishing as bigger foreign vessels are taking all the fish. Listen to the different stakeholders, see if there’s an incentive for them to change behaviours and if not, how can you find one? Do you know of stakeholders who could maybe join the development process or a brainstorm? Try and think about each stakeholder’s view; what’s in it for them? What’s holding them back? What could they potentially win in the short or long term?

“Turn the creative process into a town hall, because that’s where you might find the solution”

Human activity is a challenge for every issue, because we truly live in a time when most problems are anthropogenic. A third step we can take is to figure out how human behaviour can be changed at scale. Could it be through reward? In many countries around the world, adding a deposit to plastic bottles has dramatically reduced waste and created a more circular system. In Costa Rica, nature has been given legal rights under the country’s Biodiversity Law,  paving the way for more effective conservation. We need to think about what behaviours need to change and then think about the incentives we can offer. We could even directly ask stakeholders what would lure them to change their behaviour.

Being curious and asking questions, even the silly ones, also helps. Ideas for systemic change begin by challenging everything we take for granted. As a fourth step: look at the issue with the curiosity of a kid. Why do people with the least money pay the highest interest rates on borrowing money, trapping them in a vicious circle of poverty? What if the Earth and all its abundance had a president representing its voice and rights? When looking at systemic challenges you might get blinded by the totality of the issue, but try to see if you can move from a global level and all the way down to what that means for an individual’s health, well-being, and prosperity. The climate emergency is complex, but how does that affect a farmer living off the land? How can one give economic stability to farmers in an increasingly unstable climate?

Lastly, big ideas should be scary as hell. Climate reports state again and again that yes, climate change is human made, but we have the technology to combat climate change, now we just need a collective shift of minds and habits. All these challenges are within our reach to solve and might see us being invited as an industry to participate rather than being chased out of town as a snake oil sales guy. We don’t need more nice impact ideas, we need bloodcurdling, world-changing ideas that are going to scare the shit out of governments and businesses and make people so uncomfortable, they can’t help but act!