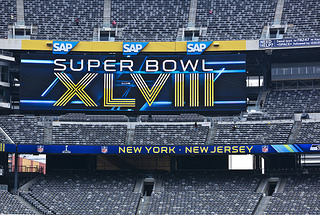 At this year’s Super Bowl, “Goodvertising” fared as well as the Broncos – left out in the cold and wondering where it all went wrong. And while the clash on the field was more obvious, there’s a subtle power struggle happening in the world’s most expensive commercial break: Advertising as usual versus the world-bettering messages of Goodvertising.

For most companies, the Super Bowl is merely a way of imprinting their brand on your mind; like the branding of old: cowboys burning their name on their cattle, to show ownership. Or so the cattle wouldn’t end up stray or rounded up by a competing farm. These brands definitely won’t want you to stray from the consumerist dream of shop-till-you-drop – they own you.

In terms of share of voice, there’s no doubt about it: standard advertising outmuscled the David-like attempts of Goodvertising to bring a different narrative forward — one that advocates caring for each other and our planet. Advertising sacked Goodvertising much like Peyton Manning was pummeled into submission. The really good commercials, the Goodvertising, as in doing and saying good rather than good-at-making-you-laugh-and-buy-more, were few and far between.

This alternative narrative needs to be told if brands want to change their role in people’s lives from being part of the problem to being part of the solution. How much real trust are you building as a brand when you bombard consumers with calories and ridiculous scientifically formulated meals so far removed from real food as to be almost unrecognizable?

From sexist to conscious love

It was great to see Axe embracing a more thoughtful (and honestly, less sexist) approach… conscious love? This time we didn’t encounter a teenage boy’s sexually overloaded fantasy of hot supermodels idolizing him as a semi-naked David Beckham (H&M nicked that one this year), but rather love as the foundation for peace.
Somewhere in the back of my mind, I recall theater classes and the Greek comedy telling the story of Lysistrata, a woman with a mission to end the Peloponnesian War by persuading all the women of Greece to abstain from sex with their husbands and lovers until peace was reached. Axe hasn’t joined hands with Lysistrata, but rather actor Jeremy Gilles pie-in-the-sky project, Peace One Day, to make their dreams of peace come true and support a more peaceful world.

While both Coke and Pepsi rolled out their usual all-singing, all-dancing entertainment brass band, their tongue-in-cheek challenger reminded people how they could enjoy the bubbly sensation of soft drinks in a more sustainable way with the simple push of a button.
The original version of their Super Bowl ad was edited (or banned as Soda Stream’s PR people will desperately try make you believe) because of its remark to big soda, “Sorry to Pepsi and Coke.” It’s sad to see that we’ve become so enamored of drama that unless something is “banned” or “the cut they didn’t want you to see,” we don’t pay attention.

Microsoft also wants us to see them as a solution rather than just a provider of expensive word processors like the one I’m typing away on now. Their commercial celebrates how technology empowers people including a former NBA star, Steve Gleason, who speaks with a Stephen Hawking-like voice apparatus – powered by Microsoft?

The last stone from David’s sling is a humorous piece from Chobani that challenges the typical eco-conscious ads using the “mom-telling-you-off” approach with an added black-and-white filter for heightened drama. This is, instead, 30 adrenaline-filled seconds showing a bear rampaging through a small local grocery store, leaving only the cups of Chobani yogurt untouched, because they’re natural or because, as Chobani promises you after the bear’s roars quiet down, “A cup of yogurt won’t change the world. But how we make it might.”

I couldn’t agree more, so forgive me for applying their mantra to the business of advertising rather than fermented milk products. Brands pay a whopping $4 million each for their 30-second shot to entertain you and keep the consumerist dream alive, but we need commitment and cash behind promoting a different story. Honestly, we don’t even need that much cash to tell the story. We could use that money to do real good and have enough left over to share the amazing things we are doing.

If we want a healthy, fun, sustainable society, we need to change the way we craft these brands and their messages. It’s not about throwing away advertising budgets and watching the brands we care for fade into obscurity, but it’s about building a narrative or movement people can believe in. And let’s be honest – you don’t need bells and whistles when you’ve got a Good product that does Good things.