Interview: Why it’s Time for Brand Purpose to Get Real 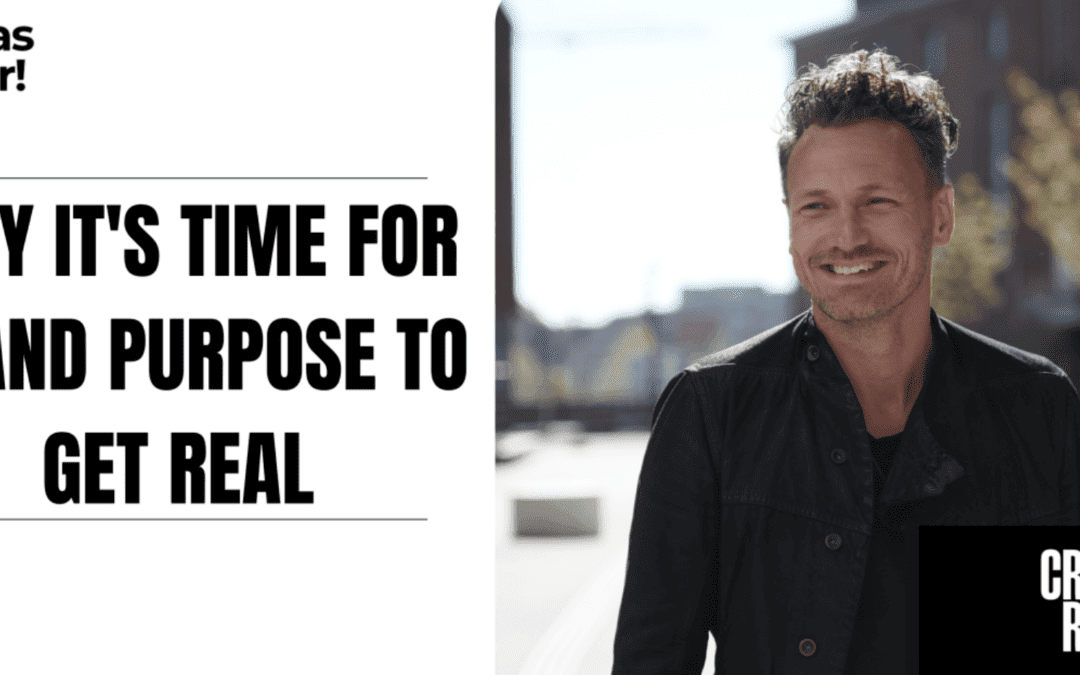 This article was originally written and published by Creative Review

When Danish marketing and sustainability expert Thomas Kolster wrote his book Goodvertising back in 2012, the world hadn’t quite yet cottoned on to the idea of purpose in marketing. Since then, of course, it’s all anyone ever talks about.

“Back then, for me, it was just a very simple premise,” Kolster says, “it was saying: I feel extremely frustrated as a creative, doing something that doesn’t really feel in line with my values. I also felt let down by elected government leaders.” He thought, “What if some of the brands I worked for could do something?”, working on the premise that if something’s good for the people and planet it might also be good for the bottom line.

Nowadays we take that for granted, of course, but, says Kolster, “at the time the book really didn’t get a lot of attention. People just didn’t give a fuck.” It took D&AD picking it up, and subsequently launching the White Pencil award (which rewards creative work that makes a real difference in the industry) for the movement to really take off. This year, Kolster is jury chairman for the D&AD Impact awards, which celebrates ideas that drive sustainable change.

“It was almost like the companies were getting this faster than the industry,” he continues. “If you look at someone like Unilever, last year they celebrated ten years of their sustainable living plan. They were one of the pioneering brands.”

And then a few years ago, everyone rushed into the space. “You can barely turn on commercials today without a business pitching themselves as a world-saving messiah,” says Kolster. He decided to ask a different question: “What leader, brand or organisation has created positive change in my life?”

Kolster believes we’re in the grip of a sustainability communication gap crisis. “There are all these brands talking about the good stuff they’re doing. And there are young people with a very clear message: ‘We want action now’. Young people want brands to help them now and all they’re hearing is 2025.” Kolster makes a joke in his keynote speeches about being away from home and catching his girlfriend being unfaithful: “I get angry and confront her and she tells me, ‘You know, what? I’m going to be a little less unfaithful each year, towards 2030.’”

The advertising industry, says Kolster, must play a part in communicating to people that some things aren’t possible. However, social media has made everything immediate and necessary and this has resulted in what he calls “hero brands”. “Brands used to talk about the product. Now they just talk about how great they are for the world,” he laughs.

Hero brands are the subject of Kolster’s most recent book, The Hero Trap: How to win in a post-purpose market by putting people in charge. “It’s no longer about talking about societal differences now, it’s about who you can help people become. These are the brands I connect with – those that make me healthier, greener, more conscious. I don’t want talk, I want brands to change my life.”

This, says Kolster, is where the space is heading. Or at least he hopes so: “I have a purpose. I have things I want to achieve in my life. Help me do that and then we might engage, then I might trust you.”

In his book Kolster mentions a brand that helped him embrace plant-based cooking, the Danish company Aarstiderne. “They don’t say, ‘We’re going to create a plant-based revolution’ or ‘look at how sustainable we are’, they talk about earth connection, this idea that you have to find something within yourself and start appreciating the joy of the land and produce.”

This, he says, is a brand that has made him truly thankful: “The interesting thing is that, even though there are many competitors around right now I’m not as price sensitive because I really feel like we have a connection.” And this, he says, is something the industry still hasn’t cottoned on to. “I feel like we’re running further into the trap. We do purpose on steroids now. Everyone’s doing it, so you shout louder and make even bolder statements.”

The problem with ‘nice’, Kolster says, “is that nice is not a constant. Look at diversity. Look at LGBTQ. Then it was LGBTQ+. When brands stand up and say ‘We are a diverse company’, they’re going to fail.” Kolster says he wants to see a shift towards answering questions such as, “How can you help me confront some of the biases that I have and some of the stereotypes that I hold? If you can help me then we can be on a journey together.”

Making bold statements leaves you open to criticism, Kolster says: “I can point fingers at Nike and say ‘Wait, there are a of places where you aren’t diverse’.”

These changes need to happen first at a leadership level, says Kolster. “Take, for example, P&G’s commercial The Talk. That commercial portrays an African American family that needs to have a talk about race and that is a piece of work that makes me reflect, that makes me confront some biases. That’s the sort of thing I want to see.” Or, he adds, “When Ikea’s Greenwich store is inviting the community indoors to embrace plant-based food, to embrace repairing furniture. That’s a real pivot.”

It’s hard for consumers with “so much nonsense out there”. Says Kolster: “But young people are starting to confront brands and demanding clarity.” To respond to this, he says, brands need simply to stay relevant and use creativity to meet this new consumer need. This creativity could be as simple as a store suggesting a product that’s close to expiration date to help with food waste or instead of sweets at the checkout having short-dated food. “We are masters of behavious change and shifting mindsets, yet we’re not coming up with the answers yet.”

But, he is confident change will come. “I am seeing a real surge in challenger brands that are sustainable by nature and getting things right from the beginning and this is already putting a lot of pressure on a lot of the purpose BS from the big brands.”