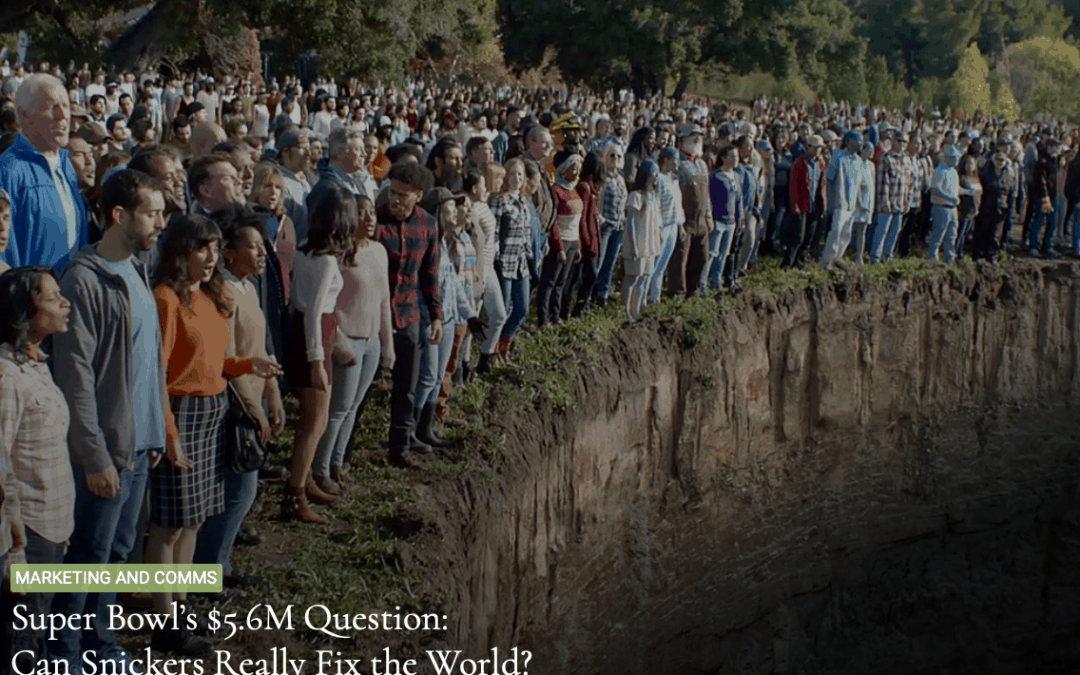 At least the game was fun to watch, because this year’s commercials make the United Nations’ sixth edition of the Global Environment Outlook report seem like interesting reading. This year, corporate America chose to laugh rather than voice an opinion.

Corporate America didn’t seem to have a lot on its mind this year besides cheap laughs and celebrities. I had expected more, as every brand these days is on a quest to find its higher purpose like an elusive chase on Pokémons. I can’t help but think that the whole purpose and sustainability talk from brands is simply too nice to be true?

Snickers even poked fun at a world in peril with its “Snickers can fix the world” commercial; though, I admittedly did enjoy the refreshing though clumsy executed take.

Especially for an election year (or maybe because of?), the 70+ odd commercials were pretty void of opinion and corporate activism, and there are really no highlights to talk about. The commercials that did tout an opinion more seemed like a cute rabbit caught in a car’s headlights or Super Bowl’s limelight. For T-Mobile and Hyundai, both of which last year raised the purpose banner, it was even more disappointing to see them falling back into celebrity-studded product plugging. Nothing makes their efforts seem less sincere. Last year we cared; this year, not so much.

A sad day for (lack of) storytelling
Sadly, I can’t name one commercial in the goodvertising space that got me even a little bit excited. The big, global issues don’t need much imagination or storytelling to captivate people, stir up emotions or to get people out of their armchairs. Just the other day, I read this grueling story about how carbon emissions are raising the acidity of the Pacific Ocean and dissolving the shells of Dungeness crabs. That image is still stuck in my head: naked, defenseless crabs. Ask me about Super Bowl ads addressing global issues in two days and I’ll look back at you like a goldfish; mouth open, staring into nothingness.

If you absolutely force me to mention some examples …
Top of my list: Anheuser Busch InBev’s Michelob ULTRA Pure Gold brand took on the challenge that, since only 1 percent of US farm land is organic, for each 6-pack sold the company will convert 6 feet of farm land to organic. A clever, engaging and sales-driven campaign turning beer drinkers into part of the solution. It’s rare to see anything exciting in the environmental space.

Ok, ok, I will also applaud Audi, Hummer and Porsche for promoting their electric vehicles, despite their miniscule current market potential. It does show courage (and a big wallet) to support an electrified future during Super Bowl.

Otherwise, the big theme of last year, diversity, was again the cause célèbre (if there was one) — as seen in Olay’s cause marketing effort, #MAKESPACEFORWOMEN, through which each tweet gives $1 to the charity, Girls Who Code:

Microsoft’s celebration of Katie Sowers, the first female Super Bowl coach (which most of all seemed like a rip-off from P&G’s “Thank you, mom” Olympic commercials):

And another AB InBev brand, Budweiser, celebrated diversity and strength, as it challenged the stereotypical perception of a “typical American”:

But again, I didn’t feel moved — these attempts to stir emotions mostly felt like a bad pass.

The NFL itself did bring up a heavy subject, though: police brutality. While former 49ers star Colin Kaepernick is still sidelined after taking a kneel against this very topic in 2016, retired 49er Anquan Boldin tells the story of the murder of his cousin, Corey Jones, by a plainclothes police officer — and his, and the NFL’s, now attempt to “Inspire Change”:

A surprising newcomer at this year’s Super Bowl was Facebook. It didn’t talk about data privacy, political ads, deep fakes or anything similar, but how people through Facebook groups get together around wanting to “rock,” in the many, many meanings of the word — from actual rocks to Chris Rock (and Sylvester Stallone, in the longer version). Although focused on a product feature, it did hint at Facebook’s bigger mission of bringing people “more together.”

At least the game was fun to watch, because this year’s commercials make the United Nations’ sixth edition of the Global Environment Outlook (GEO-6) report seem like interesting reading. Maybe Snickers were simply spot on when they poked fun of the world-bettering intention of brands? The saying goes; it’s funny, ‘cause it’s true.