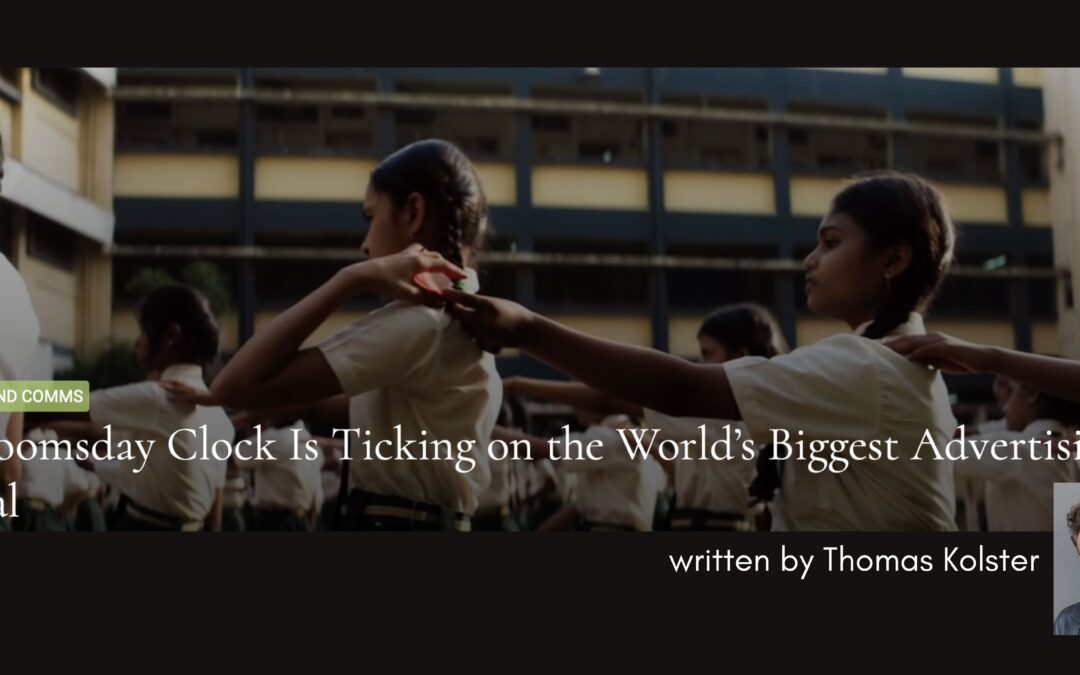 Cannes Lions is to advertising what Cannes is to film – the biggest global gathering of the industry. The change is visible, but is it simply what advertising is so good at: overpromises and sustainable fireworks without any real impact? I’ve been coming to Cannes since I was a young, hopeful copywriter and the work has truly changed. Just a decade ago, the awards (the Lions) that focused on sustainability could be counted on max two hands. Today, you can count the highest awards (the Grand Prix winners) focused on sustainability on two hands and, moreover, the change is visible across hundreds of awarded works across metals and shortlists. The content across the Festival and its fringe events also had a strong focus on sustainability, which is great to see. Yet, I still believe we need to invite more voices around the table. Greenpeace protested this year at Cannes; I rather want to invite them to a cup of organic herbal tea. For the first time, we got Cannes and many of the venues to open-up and welcome all to an Open House for Good (Thank you); next year, we’ll make sure more take up the invite.

That said, there’s sadly still hard work ahead. The lack of knowledge and education across the industry from brand to agency side is concerning, as pinpointed by reports by WFA and Act Responsible/Nielsen. It’s like a lot of the winning work is only skimming the surface of the problem rather than fully engaging and committing. The very campaign-like nature of advertising looking for short term results clashes with the long-term nature of, for example, changing behaviors. Usually, it takes 3-6 months for a new habit to kick-in – ask any smoker. Another issue I witness across campaigns is the bandwagon-like focus on popular issues like ocean plastics or whatever else is hitting. It’s a naïve and gutless approach where marketeers trying to engage on these issues look to data and social listening to see what the topic of the day is. It’s as uninteresting as a parrot at a dinner party repeating what everybody else is saying. Your brand can be a mirror of society – or it can move society. I don’t have to tell you what builds brand fame and legacy. Many issues still go unnoticed or lack more support and we seriously need a stringent focus on the Global South – we all share this beautiful blue planet and its destiny. This is a shared effort as an industry – every time one brand or campaign fails, it falls back on all of us, turning people skeptical towards what is so critical: sustainable change at scale. And who can blame them? Take my nieces (11 and 18 years old), all they’ve witnessed in their lifetime is companies being guilty of environmental degradation and social injustice and all they hear from those very same companies are: look at us, look how good we are! Let’s get this right together, here’s a few hacks based on this year’s Grand Prix winners. The heat is on from Greenpeace protest at Cannes to concerned citizens and legislative pressure. If there was a Doomsday Clock for advertising, it would probably be ticking fast from 100 to 50 seconds to midnight—closest ever to apocalypse. You can make your work count.

Don’t waste your money preaching to the converted!

Billions of dollars of media and advertising money are lost because campaigns are targeting the people who are already agreeing with the issue. Take the much-awarded anti-gun commercial, The Lost Class. Do you really think it’s going to convince any hard-headed anti-gun folks in the Midwest? Or think about most climate campaigning? Be innovative in your media choice and creative strategy – target the others instead of the Patagonia wearing climate clan. You don’t need to be a Black Lives Matter activist to embrace the usefulness of

Ideas won’t cut it, we need real change and that demands hard work, not just upbeat case videos promising everything from potential legislative change and millions of eyeballs. Our industry is not set-up for the more entrepreneurial nature this change demands. An issue is not solved in a campaign cycle, but might need an independently run origination, business unit or thinktank. See how fintech climate start-up, Doconomy, turned from a great idea in Cannes to a well-run business. A highlight this year was Data Tienda, which allows Mexican women to build a credit score – vital for bank loans – based on interactions with the local shops that have offered them informal credit for years.

Advertising has a love relationship with celebrities and animals, but who you pick matters. Sorry, Frankie the dinosaur is a cliché and I’m not convinced it’ll get any hard-headed UN bureaucrat to go up against fossil fuel subsidies (or for that sake convince any climate skeptics). Choose spokespersons these people listen to – maybe an oil exec or a deep-pocketed political campaign sponsor? It can sometimes be as easy as choosing a rapper to teach children about sugar such as Lil Sugar.

Oh yes, if we are to succeed with any of these challenges, we need to work together. Brands and agencies can benefit tremendously from non-profits and other NGOs’ insights and knowledge as well as they can benefit from market insights and commercial ingenuity from the industry. One example is Dole and Ananas Anam working together on Piñatex, a sustainable leather substitute made from the cellulose fibres extracted from pineapple leaves, which has been used in collabs with over 200 brands, including H&M and Nike. Collaboration is also about not keeping the blueprints for success to yourself but sharing them with others like when Volvo in 1959 gave away the patents to the safety belt for every automaker to use. When it comes to sustainability, we win more by working together. Think about how you can create new processes, new working groups across stakeholders to create the best of all worlds team.

I’m sick and tired of witnessing one case video after the other claiming all sorts of good. It’s tough to be in the jury and dissect the BS from the real impact. No wonder people are getting increasingly skeptical of brand claims. If you claim something – make sure to put those facts and figures into context. Michelob Ultra’s programme to help farmers in the US switch to organic farming is a no BS case.

If we are not to further jeopardies people’s trust in brands, it’s about time we stop pitching brands as these Saint-like saviors and instead empower people to take part in the change. After all, we won’t succeed if people don’t take the charge. Stop the preaching, and create brands and campaigns that coach people towards a better version of themselves: more sustainable, healthier, or more knowledgeable. Plus, you turn people from a passive target group into active ambassadors – you can’t ask for better engagement as hinted by a Goodvertising/GfK report. Whisper’s #KeepGirlsInSchool initiative in India aims to help educate girls about menstruation, a taboo subject in the country and a major reason why girls drop out of school at puberty. They cleverly empower the community to do their part.