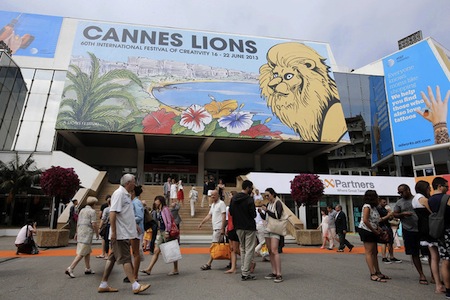 Usually, the popping of champagne bottles marks the end of the world cup of advertising—the Cannes Lions International Festival of Creativity—where this year more than 35,765 entries from 92 countries competed to bring home one of the much-coveted Lion trophies. But perhaps it should have been sirens that signaled the end of this year’s commercial power struggle—a signal of distress. For a global gathering of the most brilliant minds from agencies it was shocking to notice that 99.9% of their so-called creativity is still used to sell more stuff instead of taking on the biggest challenges of this century: the darkening clouds of the social and environmental crisis lurking in the horizon.

An island of ignorance

It made the festival of creativity look like an island of ignorance where the choice of location—the French Riviera with its super yachts and luxury boutiques—seemed even more fitting and the so-called creativity not much more than an unnecessary exercise. Unless you’re a business insider, the creative push-ups seem irrelevant to the rest of us—the people who actually watch the commercials (in ad land referred to as ‘consumers’). People really couldn’t give a damn whether this year’s hot stuff is the poetic, beautiful narrative of a Toshiba computer or babies on roller blades.

Maybe Cannes is taking the word ‘festival’ too literally—it comes from the Latin word for feast—and what a feast (or is that beast?) it is, with 500 USD-billion spent on advertising yearly. Rather than feed this beast, we should honor the true potential of creativity and solve the biggest challenge facing businesses today: the challenge of unlimited growth based on limited resources. It was the UN Secretary General, Ban Ki-moon, who most fittingly described the current economy as, “a global suicide pact” at the World Economic Forum in Davos. Have we forgotten about all of that?

The true value of business

Is the advertising industry ready to stand up to this challenge and be known for being more than the ringleader in the commercial circus of laughter, tomfoolery and jokes? I’ve been taught that when giving a critique it’s also important to remember to add a positive comment or two, so before I choke on my organic fair-trade herbal tea and go all tree-hugger on you, let me just rein it in. I would like to emphasize where the true value of business is derived from (doing good for people and planet as well as brand and bottom line) and I’m happy to announce that there were definitely also positive highlights where the campaigns weren’t only a trompe l’oeil of consumer relevance, but made a real difference for people, planet and business. In fact 3 Grand Prix’s (the most prestigious award in Cannes) were given to campaigns that could be touted as Goodvertising (using advertising as a force for good). One was the cunningly simple outdoor campaign from IBM bringing their “Smarter Planet” commitments to life at street level, proving that business can indeed deliver smarter solutions for the future.

In an advertising world that focuses way too often on the 1 billion ‘mainstream’ consumers and their aspirations rather than the 6 billion consumers living under less-privileged circumstances it was great to see DDB from the Philippines deliver real change to school children by turning their surplus sim card space into text books. Unilever proved again that a long-term investment in people pays off, with yet more brilliant campaigns for their Dove brand; making women feel more beautiful the way they are instead of the way most fashion brands are telling them they should be. Also, Unilever’s Lifebuoy brand seems to have struck a long-lasting creative cord with the promotion of hand washing as they stamped “Remember to wash your hands” on thousands of roti breads at a Hindu festival attended by millions. From small everyday gestures through to big commitments, businesses can build stronger relations and show that they do care about us and the world we live in. I believe (and know) that if a brand shows care, people will in turn care about them. Isn’t that what every brand, kicking and screaming like a needy baby, truly wants?

The war of voices

If we don’t begin to tell a different story about a fun, healthy and sustainable lifestyle waiting around the corner, and instead continue to encourage consumers to aspire to yet more consumption, the cost of running ‘business as usual’ will be too high and the winners will be those business that have adapted in time. This is a full-on war between the 99% of ‘buy-more-stuff’ ad messages versus the 1% of ‘think smarter’ ad messages. When two thirds of consumers in a recent brand survey from Brand Sustainable Futures stated that they didn’t care whether the majority of the world’s brands disappeared from the face of the earth, I’m confident that they were referring to that first group of advertisers and their self-centered messages.

A dumb way to die as a business

When we as humans work together and use our creative genius to find solutions to some of the world’s most pressing problems; we can overcome. This is not about saving the planet, the planet will survive for billions of years after we’re gone, this is about saving ourselves from ourselves! This is about keeping your business running not just for the next 10 years, but for the next 100. Just because people today are aspiring to drive a Ferrari, that doesn’t mean young boys won’t put Tesla posters on their walls in the future. The 60-year-old Cannes Lion and the ad industry’s creativity it represents seem to have lost domination of the commercial savannah and consumers, who used to be targeted as prey, seem to have had enough of the empty roars. The gangnam-style-catchy tune of the Metro Trains Melbourne commercial “Dumb Ways to Die” keeps repeating in my head…