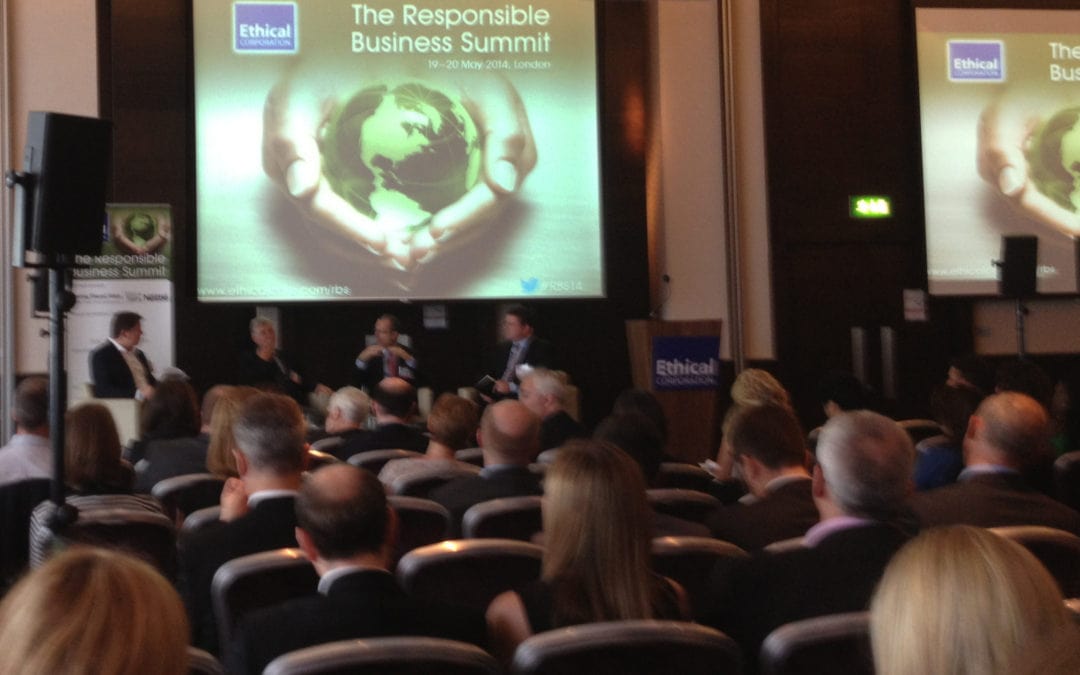 When the Ethical Corporation invited me to a conference called the “Responsible Business Summit”, I already had two matches in bullshit bingo “Ethical” and “Responsible”. I assumed we had moved on from the responsible smokescreen to discuss what really moves 99,9% of companies: Money or the fear of losing it. Admittedly, I was pleasantly surprised by the many interesting speakers and forward-thinking companies talking less about the ‘E’ and ‘R’ words and more about sustainability as an imperative for any business today and how business can move forward in P&G’s Marco Goncalves’ words, by having, “concrete, meaningful and measurable goals and targets.” This point was proven so well by Interface’s EMEA CEO, Rob Boogaard, who shared their ‘Mission Zero’ vision and how it functions as a lighthouse for their organization, helping to keep everyone on track, despite the passing of Interface’s founder and visionary, Ray Anderson.
Harvesting internal ideas
One of the sessions I really enjoyed was by Bacardi Ltd. and their sustainability director David Howson. The topic was around employee engagement, but what really struck me were the many innovative methods used by companies to harvest internal ideas. One idea saw a transport company change its loading procedures to add 20% extra cargo and as a consequence lower fuel consumption. There are many ways to crowd-source these ideas and bring them to life. I was excited to hear how Sky had created a central innovation fund across the company, in order to make sure no ideas were killed in an organizational power struggle. Without these systems in place good ideas are going unnoticed every day and they are not only leaving employees less engaged, they are also stopping companies from reaching their true potential.

Death of the CSR report, for now
Like any other sustainability conference there was a lot of talk about supply chains and reporting, but one of the sessions I chaired featured an interesting take on corporate communication, “The death of the traditional CSR report”. The session with Christine Diamente, Alcatel-Lucent, and Katie Buchanan, Virgin Media showcased how they had succeeded to create much higher engagement both internally and externally by leaving the usual CSR pdf path and instead elected to share stories through blogs, videos and social media, often featuring the very people within the companies making change happen. The digital possibilities further engaged and motivated employees around the CSR work and made it more current – not just something to be recognized once a year. Alcatel has even waved goodbye to the typical press release and instead broken their CSR reporting news through social media and as part of an ongoing storytelling initiative. The digital approach has also given both companies the possibility to involve their stakeholders in a dialogue around issues that mattered to them. VirginMedia has, for example, created an online initiative for safe Internet usage for families called Switched On.

Revival of the CSR report
That said, in a session I chaired later with panelists Alex Houtart from BNP Paribas Fortis bank and Keeran Gwilliam-Beeharee from sustainability rating firm Vigeo we brought back the 400-page CSR report from the dead, because although read by very few, the few people that do read them base their assessments and investment ratings on the information companies make available. This brings the CSR work higher up on the agenda as a company’s evaluation is dependent on a good assessment both in terms of quality and quantity.

How to turn the ship around?
There were also several sessions on the agenda around encouraging the necessary change within organizations. One session I particularly enjoyed was about how management at companies should and could incentivize sustainability. Stuart Lowthian from Barcardi shared how 15-20% of management’s bonuses were tied to delivering on sustainability targets. Unfortunately he also shared that those bonuses didn’t apply to his colleagues in marketing because they lacked the metrics. For a company where one of its key focus areas is “responsible drinking” it’s a real paradox. Surely there must be a way to put metrics in place to measure marketing efforts, if Bacardi are serious about responsible consumption? On that note, if you know of companies incentivizing their marketing teams to deliver on sustainability targets please do share in the comments section below or on Twitter (@thomaskolster).

As the conference moved forward it was increasingly clear to me that getting your house in order is simply not enough. You have to be vocal and transparent about your efforts because the survival of companies is increasingly dependent on how good they are at listening and involving their stakeholders; whether internal staff or investors eager to know more. Your stakeholders shouldn’t be seen as a group simply to be communicated at but rather they should be invited on board your journey to offer valuable advice and insights as well as ideas – continuously making your company the best it can be.

Stronger together
By inviting people to join the early stages, you can test different concepts before committing fully and at the same time you can build engagement. People tend to be much more passionate about initiatives that they have had a say in shaping than about initiatives that are just pushed at them. If, for example, you are going to start an initiative encouraging people to reduce their use of plastic shopping bags, it might be a good idea to ask for their opinion rather than just relying on traditional research. It might turn out that people actually think that those shopping bags should be banished altogether, a sentiment that is growing in some countries. It reminds me of an African proverb I used in my book Goodvertising saying: If you want to go quickly, go alone. If you want to go far, go together.